Menu
Log in
Register
Install the app
You are using an out of date browser. It may not display this or other websites correctly.
You should upgrade or use an alternative browser.

The sleepy port town of Lunenburg is a UNESCO World Heritage town with a history of ship building and fishing since the late 1700's. These days it's a mecca for tourism and relies largely on the tourist industry.
The hamlet of Blue Rocks is nearby in a semi-rural area and gets the name form the rock formations of the area.
Last Saturday was the annual club run to that area. 14 riders showed up for the ride which took us on back roads with frequent rest stops so it took nearly three hours to get there.
We met outside of town at the usual place before setting off just after 10:00 AM. 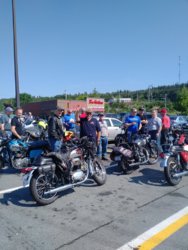 One of the rest stops along the way. 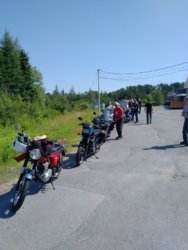 In the tourist town of Chester we took a coffee break at the Canadian icon, Tim Hortons. The bikes were spread out because of the vehicles already parked.

This time of year the tourist season is in full swing and Lunenburg was no exception. It was teeming with people - which we more or less expected. Finding places to park and have lunch was a problem so there are no more group pictures.
After leaving Lunenburg we did the Blue Rocks loop without stopping and headed back towards the cities on the route we had taken, but also did a couple of side loops to complete the ride. It's all about the ride so there wasn't much stopping and no worthy photo ops.
A few notable bikes on the ride and some have been seen before.

Two nice old British singles that ate up the 168 miles without a whimper.

A lovely Norton that we don't often see. 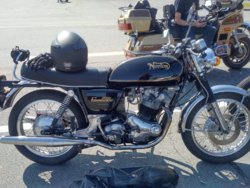 The AJS was recently restored and runs beautifully. 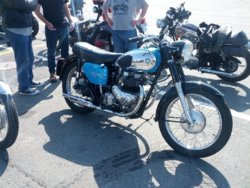